by Jack The Ripper & The Mad Psyentist 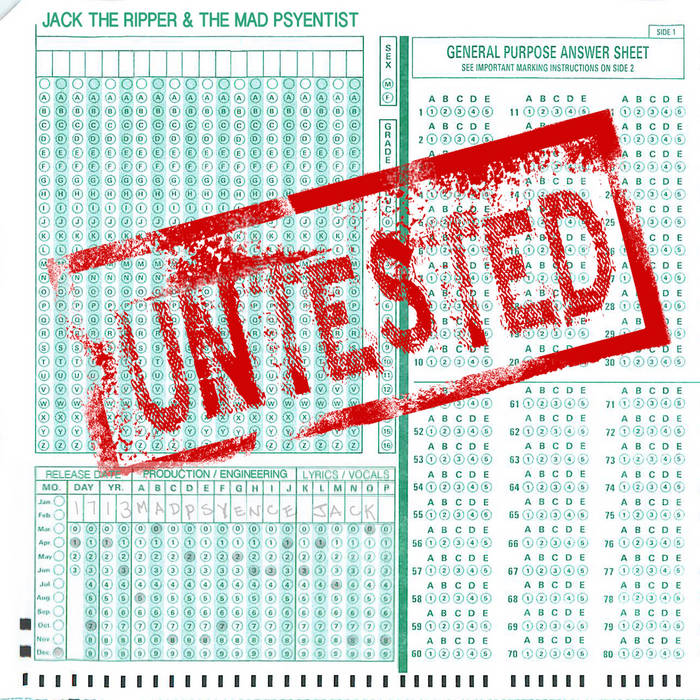 Untested questions ideas of risk, life and purpose, over a track which returns to an east coast style rap yet retains the contemplative scientific lyrics and raw drums familiar to Jack The Ripper & The Mad Psyentist. The song was written in one day while the duo were meeting to plan a third religiously themed concept album.

Life’s too nice, to be wasting
Spending time, afraid, of mistakes, I’ll be making
I’m just worried...I’m so invested
And my methods, are so untested

They say you only live once, I’ma test it
You accept the prophecies, I listen then reject it
Do you get the message? Or are you steady bested?
Gotten by the messenger, their methods are impressive...

Nested in the thoughts that you think are self reflexive
Are traps to keep you suffering, society’s suppressive
To keep you on your best shit, demanded not requested
Without it there’s no drive for success, that’s regressive, right?

But look up at the stars at night
They don’t think it’s wrong when then sun and all the planets fight
Collision and destruction that shit's normal, not a plight
Meanwhile back on earth I suffer judging what I write

Like, 'they won’t understand' or 'maybe I’ll offend'
'I don’t like how I started it, and I’m worried how it ends'
That’s life; seems like it repeats, let me test it
You only live once, then again then again

I digress, maybe not, you’re just getting what I’ve got
I keep forgetting to stop, it’s too late I’ll just not
We’re all made of space rocks turned animate, that’s crazy
At least I know there’s no such thing as lazy

I’m just dominos of atoms, me I’m made of SCHNOP
Sulfer, Carbon, Hydrogen, Nitrogen, Oxygen and Phos-
pherous, those are made of subatomic particles and waves
So it’s not our fault if we have bad day

Blame it on science, maybe some on fate
Everything is relative, like the meaning of great:
Large, good, epic; yeah I meant it like I said
Trains of thought derailed piling up in my head

Thus this logorrhea, yet there is a purpose
To make you question reason, but you’d rather brags and curses
Like, 'bitch I am the greatest' check the definition:
Large, good, epic; sucker check my repetition

You only live thrice, right? unless you get permission
To keep on cycling through life in new unique positions
I ain’t doing nothing if I can live to regret it
I heard the theory YOLO I’m just too alive to test it

And I bet if I died, my music stays alive
'Cause Psyence made me lay it down so it could survive
With double entendres my lyrics live twice
I can’t test YOLO, I don’t wanna pay the price

Life’s too nice, to be wasting
To be afraid of mistakes I’ll be making
I’m just worried, I’m too invested
For my methods, to go untested

Life’s too nice, to be wasting
To be afraid of mistakes I’ll be making
I’m just worried, I’m too invested
For my methods, to go untested

released December 17, 2013
Instrumental production and engineering by Kevin Blanchette a.k.a. The Mad Psyentist
Lyrics, concept & performance by Jack Horkings a.k.a. Jack of Co.Z

Jack The Ripper & The Mad Psyentist are a hip hop duo with a grundy, alternative post apocalyptic sound. The pair are currently working on a trilogy concept project discussing the relationship between contemporary pop culture and religions. "The Seven Sins EP" & "The Five Pillars EP" are available for download now, with the final part coming soon. Lyrics by Jack of Co.Z, beats by the Mad Psyentist ... more

Bandcamp Daily  your guide to the world of Bandcamp

YUNGMORPHEUS introduces his latest project, plus jams from Michael Sneed and Navy Blue